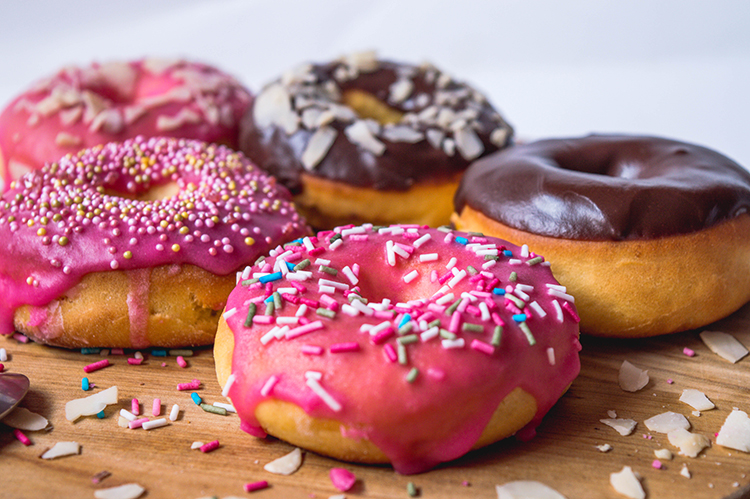 Nothing says comfort like biting into a sweet, soft, chewy, scrumptious doughnut. Sometimes when that sugar craving strikes, simply no other sweet treat will do. If you're a doughnut aficionado on the hunt for the best of the best, we've got just the place to start. From crushed strawberry Pop-Tart options in San Diego to no-frills buttermilk old fashioned treats in Chicago, here are some of the best doughnut shops in America.

From the dough to the sprinkles, everything at District Donuts in New Orleans is made from scratch. The thick and delicious doughnut options at District are very indulgent, making it difficult to order more than just one. If you are just going to order one, you might want to try their King Cake doughnut—fashioned after the classic New Orleans cake. Each of these Mardi Gras-inspired delights are topped with a tiny baby Jesus figurine. You really won't find something like this anywhere else.

Named one of the Best of Boston by Boston Magazine on three separate occasions, it's easy to see what all the hype is about at Union Square Donuts. The doughnuts here are light and airy and they're made by hand from scratch every single day. People rave about the maple bacon doughnut—made with real Vermont maple syrup and topped with thick-cut smoky bacon. Everything is better with bacon, right?

When the Donut Bar opened up a new location in Eastlake, some 500 people waited in line outside just to get a taste of these cherished treats. That tells you all you need to know about this legendary San Diego spot. Some of the most famous doughnuts made here include a big Homer Simpson doughnut (which is six inches in diameter) and the popular Big Poppa Tart made with crushed strawberry Pop-Tarts, house-made strawberry jam, and a delicious marshmallow glaze on top.

Step into the Doughnut Vault. With a cozy brick-walled interior with sparkling chandeliers dangling above, this Chicago hot spot has a unique feel. The menu may be small but each of the options pack a huge punch. As cake doughnut experts, it'd be a mistake to miss out on the mouthwatering buttermilk old fashioned or gingerbread doughnuts.

After years of traveling the country as a fine dining chef, Sugar Shack founder and CEO Ian Kelley decided it was time for a change of pace. Thus, Sugar Shack was born. This Richmond staple is a treasured favorite among locals. Each doughnut is hand rolled and cut in small batches throughout the day, so you always know you're getting something fresh. People rave about the Samoa Girl Scout cookie-themed doughnut.

The Holy Donut, Portland, ME

Utilizing as many local ingredients possible and crafted from scratch daily, the Holy Donut of Portland, Maine is a unique player in the doughnut world. The big secret to their success? Fresh Maine potatoes. Adding mashed potatoes to this beloved recipe brings a delectable moisture to each and every doughnut. They melt right in your mouth. Along with adding these mashed potatoes, the Holy Donut only uses high-quality dark cocoa powder and never bakes with fake colors. When you order, try the Maine Blueberry. It's the perfect local treat.

After graduating, Kamal Grant joined the Navy as a baker on the USS John Young. Grant's cinnamon rolls soon became a favorite among his shipmates. While traveling with the Navy, Grant got the opportunity to try all kinds of international culinary treats. That's where he learned that pastries weren't just about baking, but about culinary art. This newfound appreciation is on full display at Grant's Sublime Doughnuts in Atlanta, Georgia. Sublime brings international flavors and worldly inspiration to each and every one of their doughnuts. If you've never been, go for the Orange Dream Star doughnut—it's shaped like a star and takes just like an orange creamsicle.

Founded in 2010, Brooklyn's Dough is all about celebrating one thing—doughnuts! Fany Gerson was inspired by her Mexican heritage and some other European influences in opening this shop. Combining traditional Latin flavors like hibiscus, tropical chile, and passion fruit, you're sure to get an authentic and unique treat at Dough. People love the classic Latin American options like the hibiscus and dulche de leche doughnuts.

A trip to Voodoo Doughnut in Portland is an experience. The vibe here is off beat and quirky, and you'll find doughnut flavors you could've never imagined. Some of the zaniest ingredients include cayenne pepper, bubble gum dust, and guava jelly. Some of the doughnuts are even, unsurprisingly, shaped like voodoo dolls. The Portland cream doughnut is among the favorites. The doughnut is made with Bavarian cream and topped with chocolate and two eyeballs, "representing the vision of the great city of Portland."

Federal Donuts was created by five hospitality professionals—including James Beard Award-winning restaurateurs Steven Cook and Mike Solomonov. They are serious about concocting classic yet unexpected flavors at Federal. Each morning, the doughnuts are fried up then tossed in their house blended sugars. Favorite doughnut flavors include the strawberry lavender. If you want something a little more traditional, try the chocolate cookies and cream (perfect for chocolate lovers) or the cinnamon brown sugar.