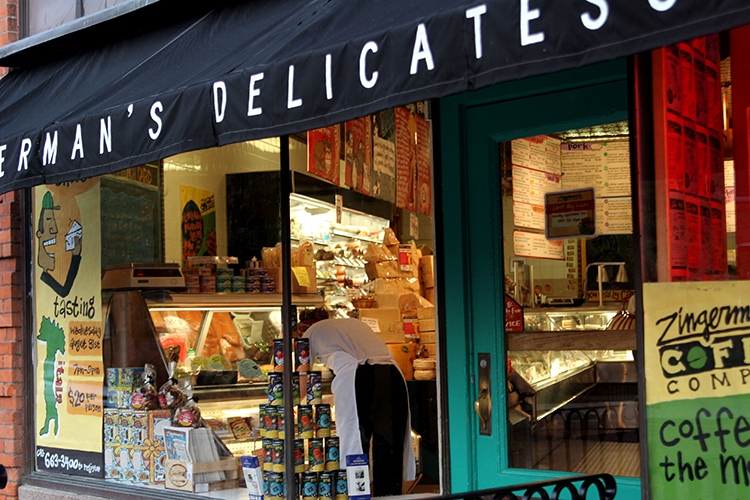 A traditional delicatessen isn't just any old sandwich shop. Created in 18th century Germany, the deli became popularized in the United States when Ashkenazi Jewish immigrants introduced the concept in the mid-19th century. Corned beef, pastrami, chopped liver—you will find all of the usual names at America's most authentic delis. Kick off your meal with matzoh ball soup, sink your teeth into a hot pastrami sandwich, and don't forget to order a potato knish on the side. From New York to Houston, here are the 10 best delis in the country.

A New York-style delicatessen in Houston, Texas. Owner Ziggy Gruber grew up working alongside family at delis in New York City and has since opened several of his own delis in New York, Los Angeles, and now, Houston. This third-generation deli expert was educated at Cordon Bleu culinary school in London and has experience in Michelin restaurants. When you visit, do not (we repeat, do not) miss out on the pastrami on rye. You won’t find anything else like it. People also rave about their potato pancakes so make sure to order a side of those, too. Finish up your meal with a little dessert: authentic New York-style cheesecake.

This Ann Arbor sandwich haven is a favorite among locals, tourists, college students, and so many more. Zingerman’s take on the hearty Reuben sandwich will soon be at the top of your favorites list. It’s made with Zingerman’s own pastrami, Swiss Emmental cheese, Brinery sauerkraut, and Russian dressing on grilled pumpernickel bread. Yum! If you want something a little less meat-heavy, Zingerman’s also has a host of delicious vegetarian options. Order the “Rodger’s Big Picnic” made with oven-roasted asparagus, grilled marinated portobello mushrooms, Vermont cheddar, and a Dijon vinaigrette on grilled True North Bread.

“The World’s Best Corned Beef, Pastrami and Cheesecake!” That’s Harold’s New York Deli’s claim to fame. In addition to that, they’re also home to the “World’s Largest Pickle Bar!” Located in Edison, New Jersey, Harold’s is serious about its pastrami. In fact, for about $100, you can order one of their signature “Triple Decker Sandwiches” that feeds 6-8 people. If you opt to order one of these, make sure it’s “The Abe Lebewohl - The King of Delis” which is made with corned beef, pastrami, Russian dressing, and coleslaw on rye. The potato knishes here are also delicious, you can even order “Harold’s Favorite” which comes with a heaping serving of corned beef or pastrami served open face on one of their renowned potato knishes. Don’t leave without ordering something from their pickle bar, either! It’s huge and delicious.

Langer’s in Los Angeles proudly proclaims to be “home of the original #19 pastrami sandwich.” What’s that, you ask? Hand-cut pastrami, coleslaw, Russian dressing, and Swiss cheese on double-baked rye bread. Simply delightful. You can also have the sandwich in a variety of iterations: with chopped liver, with French dip, with tomato and cream cheese, to name a few. Opened in 1947, Langer’s has stood the test of time in Los Angeles—which isn’t exactly an easy task. David Shaw of the James Beard Foundation wrote that Langer’s is a “legendary institution” and is “the real thing.” If you find yourself craving a sandwich in Los Angeles, stop here.

You can’t have a discussion about the best delicatessens without stopping in New York City. The 2nd Avenue Deli is “an authentic Jewish culinary experience.” Kick things off by ordering their matzoh ball soup made with carrots and your choice of noodles, kasha, or rice. Kasha is a cereal made with buckwheat, wheat, barley, oats, millet or rye. Follow that up for a hot corned beef, hot pastrami, or chopped liver sandwich. Each of these is just as iconic and delicious as the next.

Shapiro’s has been owned and operated by the same family for more than 110 years. This legendary delicatessen is known for its sandwiches stacked tall with delicious meats like corned beef, pastrami, and brisket—all of which are slow-cooked in-store. The rye bread here is also always freshly baked so when you order a sandwich from Shapiro’s, you can count on everything being homemade. As a side, order their homemade macaroni and cheese which is made daily from scratch. The dish soaks overnight with Shapiro’s proprietary blend of fresh cheeses and milk. After that, it’s baked so that it is delectably toasty on the outside but velvety smooth on the inside. The only way mac and cheese should be enjoyed. If you still have room for dessert, order their raved-about New York-style cheesecake.

A post shared by Shapiro's Delicatessen (@shapirosdelicatessen) on Feb 6, 2017 at 8:24am PST

Atlanta's General Muir takes a slightly different approach to the deli than others. While they serve all of the usual suspects like delicious pastrami on freshly-baked rye bread, yummy matzo ball soup, perfectly-prepared latkes, they also offer modern dishes with a focus on "fresh ingredients and simple preparations," according to their website. If you'd like to try something a little different, order one of their sandwiches like the roasted turkey made with portabella, lemon crème fraiche, arugula, and gruyere cheese on ciabatta bread.

Kenny and Zuke’s, Portland, OR

Take a trip to downtown Portland for hot pastrami, freshly-baked bagels, and an atmosphere that'll make you want to hang around for a while. When you order your piled-high pastrami sandwich, make sure to do so with a side of creamy potato salad and a pickle with a perfect snap. Folks can't get enough of their latkes—gloriously crisp on the outside and delightfully creamy on the inside. If you're hungry during the hours between breakfast and lunch, stop in for their brunch where they serve corned beef and eggs and French toast.

Brookline, a cozy suburb of Boston, is home to Zatfigs. Once you arrive, bagel chips and cream cheese will be on your table. Be sure to take some time to peruse their menu. Start things off with the sweet noodle kugel made with cinnamon and nutmeg. After that, you'll want to order their pastrami sandwich. If you're there during brunch hour, Zatfigs' devoted fans say that the banana stuffed French toast is utterly delicious. If you're interested in catering a Passover dinner, Zatfigs is your spot. They have everything from potato pancake appetizers to chicken matzo ball soup to brisket of beef served with a homemade natural gravy.

Dating all the way back to 1888, Katz's Deli is a force to reckon with. During the early 20th century, New York's Lower East Side was populated greatly by newly immigrated families. As such, close-knit communities were formed, and gatherings were held in places like Katz's. People would get together for franks and beans—a staple at Katz's. Today, thousands of visitors from all over the city, country, and world, line up at Katz's to get a taste of what it's all about. On the menu, you'll find only the best of the best. The pastrami is juicy and smoky and will leave you dreaming about it long after you've left. The matzo ball soup is authentically crafted. The latkes are hot and crispy and served just right. Katz's is a destination that should be added to your bucket list. No doubt about it.